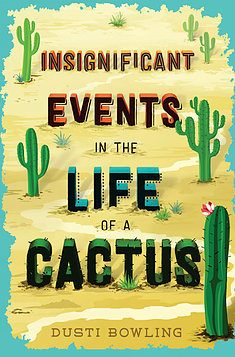 Insignificant Events in the Life of a Cactus (Sterling Children’s Books, 2017) by Dusti Bowling was so good.
Thirteen-year-old Aven was born without arms, but loves making up stories about what happened to her arms. It’s a fun joke with her friends, but when she and her family have to move because her dad lost his job and Aven has to go to a new school, she doesn’t feel like joking. Or eating lunch in front of anyone. And the “looks” and stares are hard.
Her new home is a rundown Western theme park in Arizona which has some mysteries. Eventually she meets Connor who has his own struggles and they start investigating those mysteries plus create some excitement of their own. The two also ending up helping each other.
Aven is funny, interesting, and a good friend. I like her parents and how they’ve encouraged her.
This really is a sweet book, but not too sweet. 😉 Go here and read about all the awards and lists this book has been chosen for.
Dusti’s second book, 24 Hours in Nowhere, comes out in September. Read about it here.