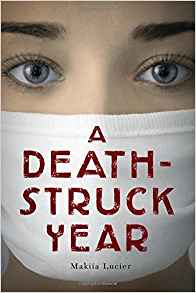 A Death-Struck Year (Houghton Mifflin Harcourt, 2014) by Makiia Lucier is a wonderful historical set 100 years ago.
Seventeen-year-old Cleo Berry is temporarily staying at her school in Portland, Oregon while her guardians are on a trip to San Francisco. But then the Spanish influenza, which has been devastating the East Coast, hits Portland. Cleo is supposed to stay at her school but she sneaks out and goes home where she is alone. She ends up volunteering for the Red Cross and risks her life helping those who are stricken with flu.
Cleo is a strong character who grows during the story to understand much more about life, and death, than she ever has before. I love how this wealthy girl who knows so little about practical things in the real world learns what’s really important.
This was author Makiia Lucier’s debut novel. The book was named an ABC Best Books for Children Selection by the American Booksellers Association. Oh, and a bonus on the author’s site is pictures of what Portland was like in 1918. See them here.
Makiia’s next book is a fantasy that came out in April. Read about it here.