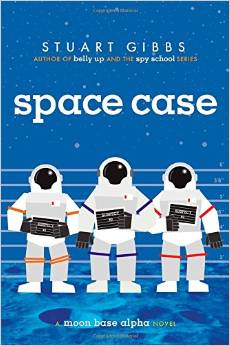 Space Case (Simon & Schuster Books for Young Readers, 2014) by Stuart Gibbs is literally out-of-this-world, like on the moon. This scifi adventure/mystery is chock full of humor despite the seriousness of the situation.
Main character, twelve-year-old Dash, is stuck on Moon Base Alpha, which doesn’t match up to the promotional brochures; in fact, it’s so boring, he looks forward to school. That all changes when scientist Dr. Holtz “walks” out an airlock in the middle of the night. Since Dash overheard Dr. Holtz talking excitedly the night before, he knows the scientist has to have been murdered. But no one on base will believe him. And he’s not allowed to share the news with anyone on earth. In fact, he’s not supposed to talk about it at all. But if Dash is right, there’s a killer loose on base.
It’s a fun read. And, I just love the cover, Art Directed by Lucy Cummins.
If you want to learn about author Stuart Gibbs or want to check out his other books, go to his website here and/or read an interview of him here. 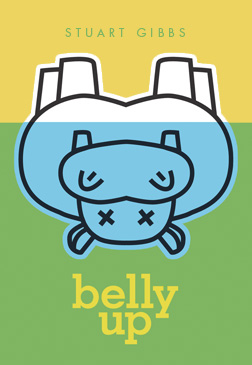 Belly Up (Simon and Schuster, 2010) by Stuart Gibbs is one of those fun ridiculous stories, yet has such a satisfying ending. I loved the details of the unusual setting and think kids will too.
12-year-old Teddy Fitzroy is the only kid for 30 miles and lives at FunJungle. Going to an entertainment place is one thing, but living there all the time? Marge the security guard has it in for him for his practical jokes, so when there’s trouble at Henry Hippo’s enclosure she blames him. But Henry is dead. And Teddy thinks it’s murder. Could it be the Head of Operations, Martin del Gato, who hates animals and kids? Or Pete Thwacker, the head of PR, who’s had to deal with Henry’s messes? You’ll have to read it to find out.
This is author Stuart Gibbs first book, but he already has two more in the publication process. The Last Musketeer will come out in fall 2011 and Spy School will be out in spring of 2012. Sounds fun to me.
More humor is available on Stuart’s site, in his bio. You can even find a link to buy your own Belly Up shirt.