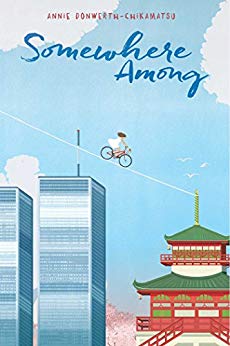 Somewhere Among (A Caitlyn Dlouhy Book, 2016) by Annie Donwerth-Chikamatsu is such a good book. It’s told in verse and the sparse language works so well.
Ema has a Japanese father and an American mother. Usually, she gets to spend the end of the summer in California with her mom and Grandpa Bob and Nana. But this year, her mother is expecting a baby and needs rest, so beginning in June, she and Ema will stay with Jiichan and Obaachan in western Tokyo. And it’s not going to be easy–especially with Papa working so far away. Then shortly after school starts, the whole world changes with the attacks on the World Trade Center and the Pentagon on September 11, 2001.
Listen to Ema herself:
At home
with Mom and Papa
I am
between
two cultures
two languages
two time zones
every day.
Everywhere I go
here or there
I am different.
Doesn’t that just pull your heartstrings?
Read about the author and her family here.