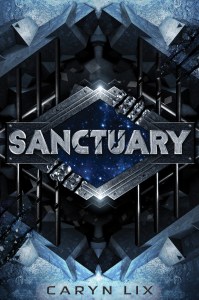 Sanctuary (Simon Pulse, 2018) by Caryn Lix is one of those stories that if they make into a movie, I’m not sure I’ll be able to watch on the big screen. And *Shudder* I don’t want to reveal why.
Kenzie and her family live in Sanctuary, a prison space station for teen super-criminals. In fact, Kenzie is a part-time junior guard in training and her mother is the commander of the facility. Kenzie feels she has to prove herself to the other guards–favoritism and all that–but she’s a bit more concerned about the news her parents just dropped on her. So she’s a little tense when a drill hits that seems over-the-top, even for an AI like Sanctuary.
With Dad gone, the others off station, it’s just Mom and Kenzie. They should be able to handle anything. But when Kenzie is taken hostage by the prisoners on level 5, she discovers her mother’s loyalty is to the corporation Ominstellar over her own daughter’s life. And Kenzie understands. Mostly.
The situation worsens from there.
Let’s just say creatures in outer space.
I reached a point where I couldn’t stop reading.
This is the author’s debut novel that came out in July. Read about Caryn here.