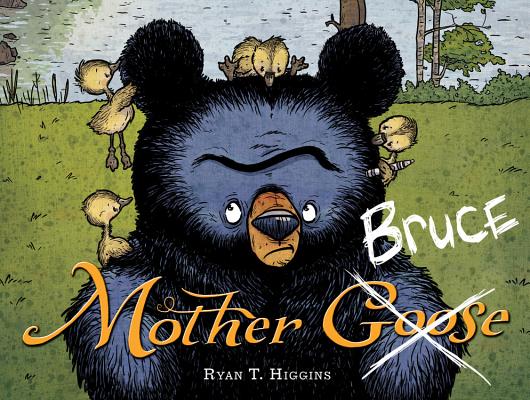 Mother Bruce (Disney Hyperion, 2015) by Ryan T. Higgins expresses humor from the get go with the title (Goose crossed out and Bruce written above it).
On the first page we discover, “Bruce was a bear who lived all by himself. He was a grump.” And his expression shows that. That are a lot of things he doesn’t like. But he does like cooking eggs into “fancy recipes that he found on the internet.” When he finds a recipe for “hard-boiled goose eggs drizzles with honey-salmon sauce,” Bruce gets the ingredients, and starts to cook, Bruce becomes “the victim of mistaken identity.”
I love the humor in this book with Bruce as the unlikely mother of this group of goslings. Whom he can’t get rid of!
Mother Bruce has won these awards: 2016 E.B. White Read Aloud Award, 2016 Ezra Jack Keats New Illustrator Honor, and a 2016 Kirkus Best Book.

A new Bruce book came out last October called Hotel Bruce. This is the third book by Ryan and sounds fun too. Read about it here.
You can see Ryan’s sense of humor on his about page where he says:
“Ryan T. Higgins is an author/illustrator residing in Southern Maine. He lives with his three dogs, three cats, two geckos, one tortoise, one son, one daughter, and one wife. As a child, he lived on a diet of cartoons, cheese sandwiches, and climbing trees. At the age of four he decided to become a cartoonist and he’s been making his own cartoons ever since.”
*I’ve joined with Susannah Leonard Hill on celebrating picture books on Fridays.