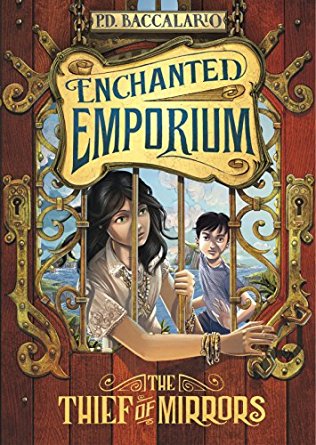 The Thief of Mirrors (Capstone Young Readers, 2016) by P.D. Baccalario was a fun read set in Applecross, Scotland, well, mostly set in Applecross. There’s a trip on the Incognito Bus, a visit to the Sunken Castle, plus a puppet who talks in rhyme, and of course a villain.
Thirteen-year-old Finley McPhee has just had one of the best summers of his life until his older brother Doug ruined it. Doug’s got the scorpion key and likes Aiby Lily, the girl Finley likes. Doug says he’ll give the key back in three days, after the meeting that Finley is not invited to. But when everyone is missing, Finley has to go to the rescue.
The book was originally published in Italy in 2013. The translation was well done, except copying editing didn’t catch some errors. Turns out it is book 4 in the Enchanted Emporium series, so I’ll have to catch up on those. But the book stood alone just fine.
Here’s info about the author here.