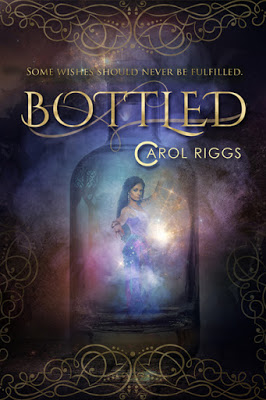 BOTTLED (Clean Reads, 2016) by Carol Riggs is a YA Fantasy that’s a modern take on a genie story.
Adeelah Naji was seventeen a thousand years ago when she was turned in to a genie. She’s still seventeen. And still imprisoned in a bottle and having to serve masters who don’t care about her. Adeelah wants to find Karim, the boy she fell in love with, but has to have her master’s permission to search for him. She’s also on the run from Faruq, although masters have a tendency not to believe he is a threat.
This book snagged my attention from the start and pulled me through it quickly. I sympathized with Adeelah and love the humor: “I must say, this guy isn’t the swiftest camel in the caravan.” The story really ramps up when Adeelah ends up with a seventeen-year-old master named Nathan.
I got to interview Carol about this story for some background info and what she’s working on next.
1. Where/how did you come up with the idea for Bottled?
From watching “I Dream of Jeannie” when I was young. I loved the magic in the show, even though the chaos of Jeannie messing everything up before she fixed it drove me nuts. At the time I wrote BOTTLED, there also weren’t any genie novels around that I knew of, so I thought it was unique. Now, there are a number of genie novels, but I still feel BOTTLED is different enough to bring a fresh slant to the subgenre.
2. What kind of research did you do into genies and the Arabian culture?
I didn’t do a TON of research since most of the novel is set in the U.S. (and a chapter or so in Kenya), but I did research the history and geography of the Arabian area, coins, insects, and foods like sage tea and al kabsa. I checked out Arabian names. I delved a little into djinns/jinns, and decided I wanted there to be a difference in Adeelah (main character) versus a “real” genie/djinn that I described as evil spirits like demons, beings that aren’t wise to be associated with.
3. How long did it take you to write the book?
I started BOTTLED in early 2011, got interrupted by life and line-edits for my debut, and finally finished the rough draft in 2013. So it was pretty stretched out due to other commitments and projects. I revised it off and on since 2013, and tightened and polished it up again just before submitting it to Clean Reads in January 2016.
4. I know you have another book coming out this fall. What’s that one about and who is publishing it?
My next book is a YA light sci-fi by my debut publisher, Entangled Teen. I wrote it in 2010-11 (right before BOTTLED), and I’m delighted it’s finally going to be released in October. Originally the title was SAFE ZONE, but my editor wanted something zippier and less “stiff” so now it has now been retitled as THE LYING PLANET. It’s the story of a teen named Jay Lawton who lives on the terraformed (made to be like Earth) planet of Liberty, and finds out everything he thought he knew about his world isn’t true. Which of course throws his life into chaos and causes lots of hopefully interesting conflict. It’s on Goodreads already but it doesn’t have a cover yet.
Keep up with Carol on her website and twitter.