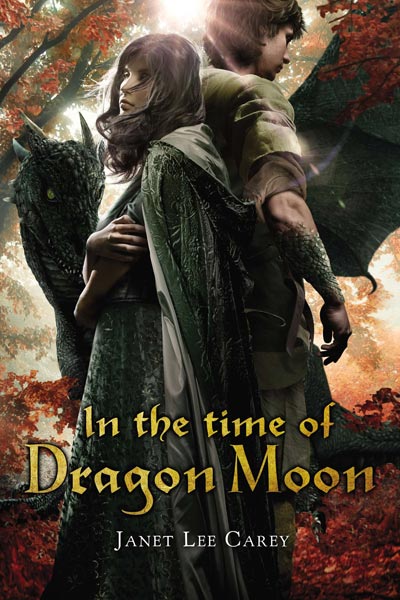 In the time of the Dragon Moon (Kathy Dawson Books, 2015) by Janet Lee Carey is full of dragons and kings and fey folk, and a young healer’s helper.
Uma Quarteney is half Euit and half English. She’s been following in her Euit father’s healer footsteps, but since she is a girl, she can’t be the future Adan. Life changes abruptly when Uma and her father are kidnapped and taken to the Pendragon King’s castle to heal the barren queen so she can have a second child. Their Euit village is held hostage. When Uma’s father dies unexpectedly, she alone has to heal the mad queen to save the people of her village and her own life.
There’s mystery and romance in this story as well as danger and intrigue.
Janet is an award winning author of fantasy and fiction and she’s created another believable world with this book. Check her website for a complete list of her books.