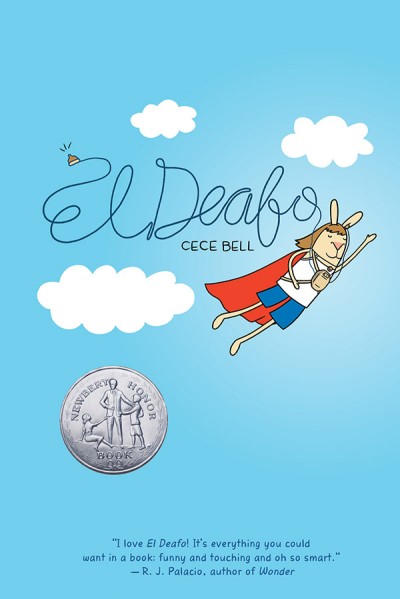 I loved the graphic novel El Deafo (Amulet Books, 2014) by Cece Bell. Based on her own childhood, four-year-old Cece becomes ill and loses her hearing. The story outlines kindergarten through fifth grade showing Cece’s struggles and accomplishments. I can relate to Cece’s shyness as a child, and felt so sympathetic for her and rejoiced when . . . well, I don’t want to spoil the end if you haven’t read it. Here’s a book trailer with Cece herself talking about El Deafo.
I believe this story is important for kids to read to not only help them understand better how to deal with someone who is hearing impaired, but to learn that differences can be “superpowers” as Cece says. I’m not the only one who thinks it is important as the book is a 2015 Newbery Honor book! On the publisher’s site you can read all kinds of great reviews. Here’s an article about Cece and how she made the book, too.
Author/Illustrator Cece Bell has written and illustrated other books. See details here.