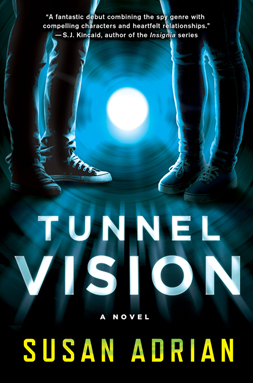 I was introduced to Tunnel Vision (St. Martin’s Griffin, 2015) by Susan Adrian when I went to hear another author speak. After hearing Susan talk about her book, I had to get it.
Jake Lukin has a special power–he can identify where someone is (and more) by touching an object the person has owned. His dad has warned him what the government will do if anyone finds out, but wanting to impress a girl at a party, he shows off his skill. Now he’s being followed around by government agents; or is it bad guys…
Tunnel Vision is a fast-paced thriller that is hard to put down. There are unexpected twists in the story, romance, and sacrifice. I’d love to see it made into a movie. Oh, and the book has been nominated as a YALSA 2016 Quick Pick for Reluctant Young Adult Readers.
This is author Susan Adrian’s first book, but she’s working on a sequel! Check her website for her Tunnel Tour–she’s been traveling all over the country.