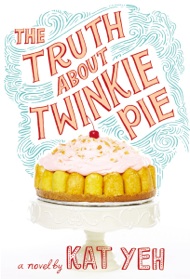 The Truth about Twinkie Pie (Little, Brown and Company, 2015) by Kat Yeh is not an easy story, but it’s a good one.
Twelve-year-old GiGi and her nine years older sister DiDi have moved from South Carolina to Long Island. GiGi can reinvent herself at her new school and even go by the new name of Leia. (It’s a better nickname for her real name of Galileo Galilei). But life gets complicated with a new friend–a guy!–a girl who hates GiGi/Leia, and family secrets revealed.
This isn’t one of those forgettable books. Author Kat Yeh has a goal of helping children cope and has written about real life and real Issues in this story. (Read more on her blog April 9, 2015.) I hope it reaches the kids who need it and wins some awards, too!
A fun bonus of The Truth about Twinkie Pie is all the recipes written by the girls’ mama.
Read about the author’s published picture books on her site.