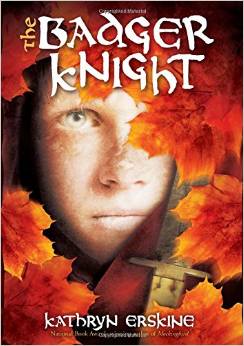 Badger Knight (Scholastic Press, 2014) by Kathryn Erskin may be historical since it is sent in England 1346, but it definitely isn’t boring. I found the book hard to put down as I experienced life with the main character.
13-year-old Adrian isn’t content to be small and sickly–he’s going to be an archer. And help in the war against the Scots, or at least become an apprentice bowyer to his father. But no one–not his father or his friend Hugh and especially Good Aunt–think he’s much use beyond collecting goose feathers to fletch arrows. The village bullies call him Badger since he puts dirt under his eyes to dim the brightness of his white face when shooting arrows. Adrian claims the name Badger himself when he goes to help his friend Hugh in the war.
This book is a 2014 Junior Library Guild Selection–you won’t want to miss reading it! And isn’t the cover gorgeous?
Adrian isn’t the only traveler–so’s Kathryn. See her bio!
I have a review of another of Kathryn’s books here: Mockingbird.