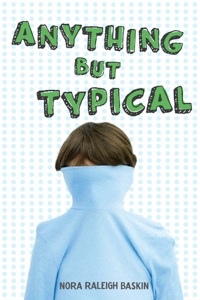 Anything But Typical (Simon and Schuster Books for Young Readers, 2010) by Nora Raleigh Baskin has a main character who is “anything but typical.” 12-year-old Jason Blake is autistic kid living in a neurotypical world. “School doesn’t always go very well,” he says. Jason flaps his hands if excited, when he’s going to say something, or if thinking. Others think he is weird. He knows he’s supposed to look people in the eye, but he doesn’t like to. Besides most people look the same to him. “I know no girl will ever like me,” he says. But then PhoenixBird likes his stories on the Storyboard website. Maybe she can be his friend. But when they both get to go to the Storyboard conference, he’s afraid once she sees him she won’t like him anymore.
This story is well-told. It made me more understanding and sympathetic of those who have some strange uncontrollable habit. I think every kid should read this award winning novel. Look here at all the awards!
I love what Nora says on her site: “Most everything I write, whether it is a novel or an essay or a short story is very much a part of my life.. The world as I remember it… In other words..I rarely make anything up..mostly I pick and choose from things I’ve experienced or seen or done..and give them to my characters.” Read about her other books on her website.

One thought on “Anything But Typical”