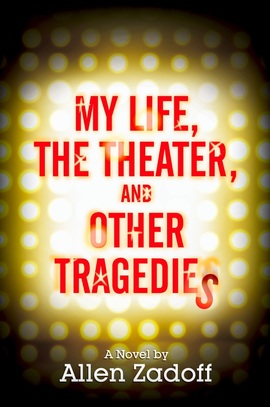 Sophomore Adam Ziegler has been hiding in the dark of the high school theater. Of course, he runs the lights so that’s one reason he’s hidden. But there’s more to it than that. Like his father dying 2 years ago. And the feud between the actors and the techs. But then he’s attracted by an actress named Summer and crosses the line.
I love how Allen Zadoff author of My Life, The Theater, and Other Tragedies (Egmont, 2011) makes this story all so real.
The author is open about his own tough experiences growing up. Read here on his website. Allen is an award winning author of Food, Girls, and Other Things I Can’t Have, which won the 2010 Sid Fleischman Humor Award. Click on the main page of his site to see one interesting quirk about his main characters.

His book Since You Left Me is coming out in August. And in summer of 2013, Allen has a thriller series called Boy Nobody coming. Woo Hoo!