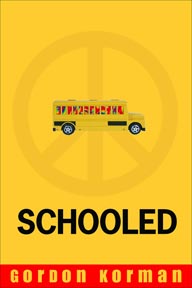 “I was thirteen the first time I saw a police officer up close. He was arresting me for driving without a license. At the time, I didn’t even know what a license was. I wasn’t too clear on what being arrested meant either.” This is another of those great openings which made me definitely want to read on.
Schooled (Hyperion, 2007) by Gordon Korman is about 13-year-old Capricorn Anderson, who was raised on a commune by his grandmother Rain. He’s not been in the real world at all. When his grandmother falls out of a tree and has to go into the hospital and then rehab, he’s put in a foster home. The story is also about Hugh Winkleman, the 8th grade loser, who normally would have been the elected president of the 8th grade, but is now relieved because big-man-on-campus Zack pushes for Cap to be the picked-upon-president.
The story is told in multiple viewpoints. Read more on this author’s site, including some short stories and upcoming book titles.