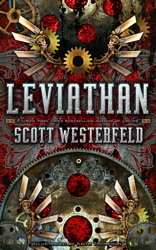 The concepts in Leviathan (Simon Pulse, 2009) by Scott Westerfeld are interesting and felt real. I cared about the two main characters from opposing camps in this alternate world. It’s funny, too. And had wonderful illustrations by Keith Thompson. This is another one of those books where I’m waiting not very patiently for the sequel (Behemoth coming out in October 2010).
Okay, you have to watch the book trailer on Scott Westerfeld’s site for Leviathan. The ending of it made me laugh.
This book is an early YA and like The Evolution of Calpurnia Tate deals with issues of evolution, plus both are set in the early 1900s.