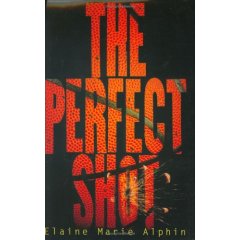 Murder Mystery, yet so much more…

Brian uses basketball to block his memories of the murder of his girlfriend.  But then he receives a school assignment to study the justice system in relationship to a girl’s murder in 1913.  What if his memory of the jogger he saw is like the evidence not presented in the historical case?  What if Amanda’s father will go to jail wrongly accused like Leo Frank did?  But justice will prevail, right?  He told the police about the jogger.  His father says to stay out of it.  But then his father also says to stay out of it when his best friend is arrested for being a black kid in a white part of the city and Brian knows that’s not right.  So what is he to do?

This book by Elaine Marie Alphin is very compelling.  I thought I’d read just a bit before bed, but then two hours later I’m still up reading and must reach the end.  The Perfect Shot (Carolrhoda, 2005) could not have been titled anything else, which you’ll see when you read it yourself.

I already was looking forward to Elaine speaking at the Kansas SCBWI conference in June (http://kansas.scbwi.org/), as I’ve been helped by many of her articles in ICL’s Children’s Writer in the past, and I really like her book Counterfeit Son, but now I almost feel in awe that Elaine Marie Alphin is coming to our conference!  I hope to learn a lot from her.