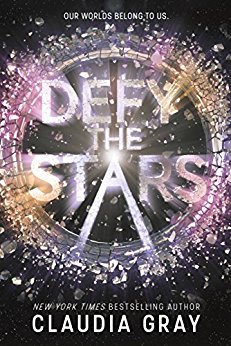 Defy the Stars (Little, Brown and Company, 2017) by Claudia Gray is a fascinating book. I want to say it’s about artificial intelligence, but it is so much more.
Seventeen-year-old Noemi knows she’ll die in three weeks. One of the teen and young adult soldiers ready to go on a suicide mission, her sacrifice will help give the planet Genesis time. And at least she can save her best friend/almost sister Esther. Their enemy has better ships and a robot army. The mechs aren’t afraid to die. Noemi wonders, “How evil do you have to be to kill another world’s people and risk none of your own?”
Abel is a mech (robot model) trapped in a marooned enemy ship on Genesis for almost thirty years. His one overriding desire is to get back to his creator, his father. But he’s also tired of being alone.
These two enemies meet and end up having to work together.
I enjoyed all the twists and turns in the story. This book is the first in the Constellation series. I look forward to more.
Author Claudia Gray has written many more books including some Star Wars novels! Here’s her website where you can see her other titles, find out that she chose her name, and more.