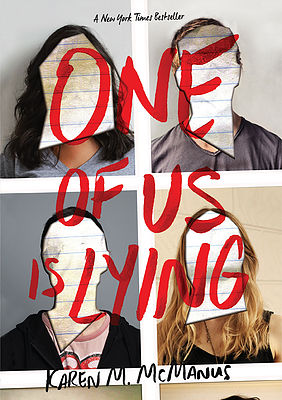 One of Us Is Lying (Delacorte Press, 2017) by Karen M. McManus is quite the mystery!
Five students in detension, but one doesn’t come out alive. All four remaining students are under suspicion, and not just because they were in the room. But Simon, the deceased, was going to reveal secrets about all four of these classmates. But Bronwyn, Addy, Nate, and Cooper know they didn’t do it. The teacher has no motive. So who could have murdered Simon?
The book has been a New York Times Best Seller and might become a TV series! I look forward to it.

Read about author Karen M. McManus here. In January, she has a new book coming out, too. Read the description here. Sounds great, too!