CHARACTERS, that is . . .
Though both of these characters and their stories are so believable, you feel as if you could meet them on the street. 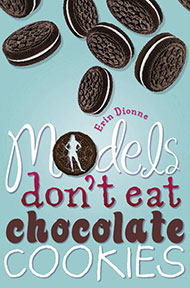 In Erin Dionne‘s debut middle grade novel, Models don’t eat chocolate cookies, (Dial, 2009), we meet 12-year-old Celeste Harris. Celeste is round and doesn’t mind being round, but when she tries on the bridesmaid dress for her cousin’s wedding, it’s a disaster. The disaster gets worse when her aunt spots the Husky Peach modeling competition and thinks Celeste should enter, in fact she enters her. To make things worse, Celeste’s best friend Sandra starts hanging out with Celeste’s archenemy Lively Carson who calls Celeste a cow and worse.
Who can help Celeste in this dilemma? The lady in red!
Author Erin Dionne says she’s “been a Husky Peach and a Skinny Banana” so knows what it is like to struggle with weight. Read more about Erin and her next book at: www.erindionne.com 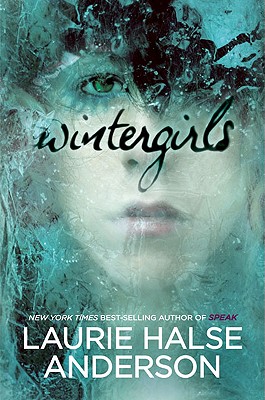 YA novel Wintergirls (Viking, 2009) by Laurie Halse Anderson deals with anorexia and bulimia and obviously strikes a chord with many teen readers–just check out all the YouTube videos made about the book!
The opening is fascinating: “So she tells me, the words dribbling out with the cranberry muffin crumbs, commas dunked in her coffee. She tells me in four sentences. No, five. I can’t let me hear this, but it’s too late. The facts sneak in and stab me.” Doesn’t that make you want to read on? It sure did me. And I discovered that Lia wants to weigh . . . 0. Don’t you wonder how someone can be that desperate.
The questions is: Will finding out what happened to her ex-best friend Cassie change anything for Lia?
Laurie is the author of Speak, Chains, Fever 1793 and more. You can read about her and her books at her website: http://www.writerlady.com/.