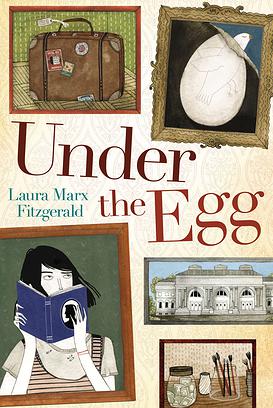 Under the Egg (Dial Books for Young Readers, 2014 ) by Laura Marx Fitzgerald is an eggstraordinary story. Theo, now that her grandfather Jack is gone, is in charge of their 200-year-old family home and her eccentric mother. When dying, Jack told her to look “under the egg” and she’s afraid what she’s found is not only going to ruin his reputation, but that she’ll find out he’s not who she thought he was.
I love the first two lines:
“It was the find of the century.
Or so I thought at the time.”
And I love Theo. As a parent I want to take her under my wing. In my kid mind, I want to be her friend. She’s interesting, smart, and brave.
This mystery has page turning chapter endings, villains, and the fun of a hunt. It’s also a winner of the New Atlantic Independent Booksellers Association BEST MIDDLE GRADE BOOK OF THE YEAR!
Take a look at Laura Marx Fitzgerald’s About Me on her website. It made me smile.
The author is also on twitter: @marxfitzy