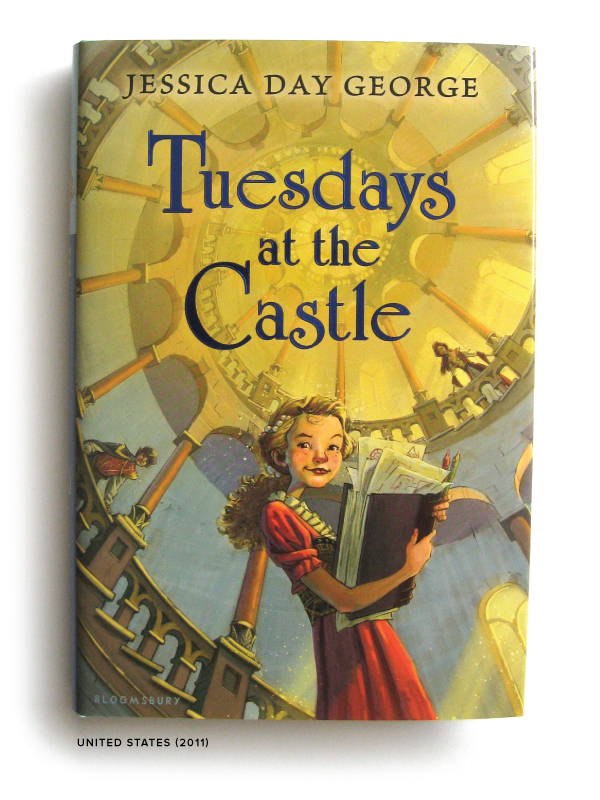 Tuesdays at the Castle (Bloomsbury, 2011) by Jessica Day George is the first book in a series about a castle that changes on it’s own. Unwelcome visitors end up in bare rooms that move far away from the throne room and welcome visitors in luxurious rooms that move into desirable locations. Rooms change size, too. And when the King and Queen disappear, the castle helps the Prince and Princesses defend themselves against those who want to take over.
The opening lines (and the cover) show the sense of fun in this book: “Whenever Castle Glower became bored, it would grow a new room or two.” Here’s what the author has to say about how she came to write the book: http://www.jessicadaygeorge.com/#/tuesdays-at-the-castle/. It has been published in the UK and in French in Canada.
The sequel, Wednesdays in the Tower, came out in 2013. It also has been published in the UK, in French Canada and in Spain.
In 2014, Thursdays with the Crown came out and finished up where book two left off.
Coming in February 2016 is book four: Fridays with the Wizards! (Cover reveal here.) I need to catch up my reading before then.
All four books were illustrated by David Hohn. See more of his work here.
But, wait! Jessica has more books! See them all on her site.