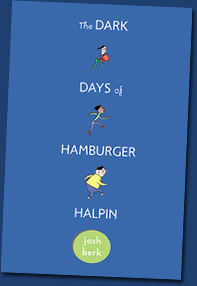 The Dark Days of Hamburger Halpin (Knopf Books for Young Readers, 2010) by Josh Berk mixes in those 3 elements plus history, a new friend and hot girls!
Will Halpin has left his girlfriend and the deaf school behind as he doesn’t want to take sides in the deaf fight. He’s a good lip reader so starts at a mainstream school at Carbon High. There in a history book, he discovers a relative’s death in the town coal mine. But that’s not the murder Will needs to solve.
This debut novel has received starred reviews from Kirkus. Josh Berk has another comedy/mystery coming out next year. I’m looking forward to it!
Read more about Josh at his website, where you can learn what inspired Dark Days and enjoy more of Josh’s sense of humor.