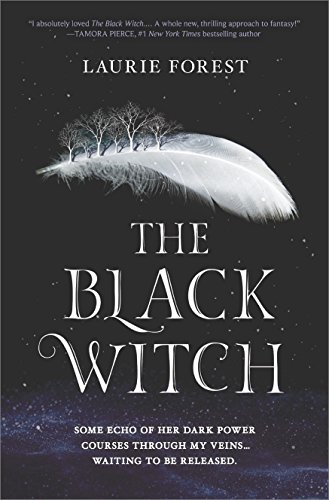 The Black Witch (Harlequin Teen, 2017) by Laurie Forest is a new fantasy by a debut author and I can hardly wait for the sequel to come out. It’s expected out in 2018. (Meanwhile I just bought the prequel Wandfasted on Kindle.)
Elloren is seventeen and lives with her uncle in an isolated small village. There no one takes notice that she looks exactly like her grandmother, The Black Witch who saved all of Gardenria during the Real War. Nor does anyone worry she doesn’t have any magical power. But when Aunt Vyvian comes to visit, she’s demanding why Elloren is not wandfasted (engaged). Aunt Vyvian wants to take Elloren under her guidance and introduce her to eligible young men. Instead, Uncle Edwin decides to send Elloren to University where she can learn the apothecary trade. But since Elloren won’t commit to being wandfasted to the young man Aunt Vyvian has chosen for her, she won’t pay for the girl’s schooling and Elloren has to earn her way by working in the kitchen–with other races. To make matters worse, her new roommates at University are dreaded Icarals.
In this magical story of prejudice, lies, and secrets, Elloren has to decide who to believe and what is right and wrong.
On her website, author Laurie Forest shares what she is reading here.