Story with Humor and Drama 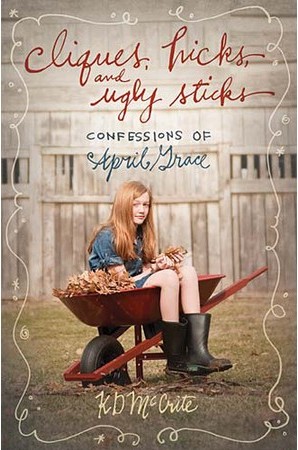 Clicks, Hicks and Ugly Sticks (Thomas Nelson, 2011) by KD McCrite is the second in a series, but not having read the first isn’t a hindrance to enjoying this story. Look at the opening lines:
Isabel St. James is a recovering hypochondriac.
She once thought she had hoof-and-mouth disease just because she skittered through the barnyard while the cows were there waiting to be milked.
It makes me want to know more about 11-year-old April Grace who obviously must live on a farm. In the first chapter we learn so much about her–not just age, family, hair color–but that she has compassion, and is opinionated and funny. Here’s a brief introduction to the story:
April has had to move in with her sister, Myra Sue, to give up her room for Isabel (the drama queen) and Ian St. James. Her sister is trailing after dumb ol’ Isabel like she’s the best thing since sliced bread. If that’s not bad enough, April’s starting Junior High and discovering how friends change, and not in a good way. Then her mother starts being grouchy all the time. And then there’s that boy at school who keeps eyeing her… What’s a girl to do? Especially when she has to spend so much time helping Isabel and Myra Sue?
Preteen girls will enjoy April Grace. (It may be Christian, but it sure isn’t preachy!)
The first book in the “Confessions of April Grace” series is called In Front of God and Everybody. The third book, Chocolate Covered Baloney is coming out this fall.
You might want to wonder over to KD McCrite’s website, where there are book excerpts, book trailers and more.