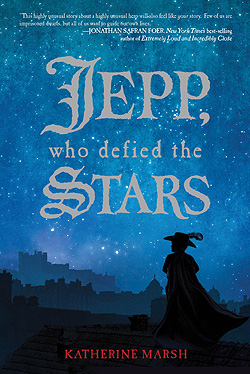 Jepp, Who Defied the Stars (Hyperion, 2012) by Katherine Marsh was eye-opening for me. I had no idea that dwarfs were treated so badly.
Jepp, who has always lived with his mother at their inn, has been offered a chance to go to Coudenberg Palace. He takes it and then finds he is to be humiliated to serve as entertainment for the Spanish Infanta and her royal court. He and the other dwarfs are held prisoner and live at the whims of those around them. However, this intelligent young man doesn’t resignedly accept his fate.
The story was inspired by real characters in history and the author’s mother’s interest in astrology. Read more here.
I encourage anyone who starts reading this book and finds the formality of the writing a bit off-putting to push through–soon you’ll not notice it at all as you become engrossed in the story.