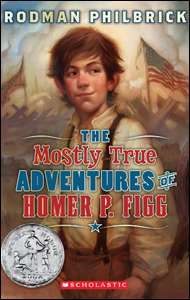 The Mostly True Adventures of Homer P. Figg (Sky Blue Press, 2009) by Rodman Philbrick is not only very fun, but it’s very good. And that’s not just my opinion since it was a 2010 Newbery Honor book! I love how the cover presents a good picture of the flavor of this book.
Here’s a brief introduction to the story:
12-year-old Homer and his brother Harold have been entrusted to the care of their mother’s late sister’s husband. Squint, according to Homer, is the meanest man in Maine, and since he makes them sleep in the barn and starves them it must be true. When Squint sells 17-year-old Harold to the Union Army for $250, Homer escapes and goes to save him. Read about his adventures and misadventures and the people he meets along the way.
The author also wrote Freak, the Mighty, which was made into a movie called The Mighty. Read about that and other books on his website. If you’re a young person wanting to write, read what he has to say here.