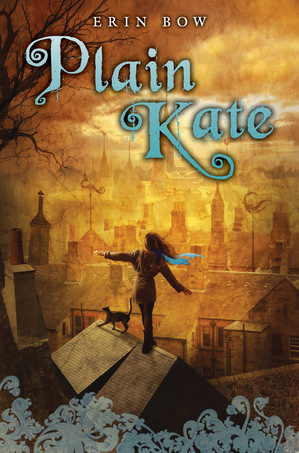 Kate’s woodcarver father has taught her woodcarving, too, but when he dies unexpectedly, someone inferior gets his place. She’s not old enough to be apprenticed yet, so must leave her home and fend for herself. For a while she lives in her father’s stall. But she’s so good with her knife the people wonder if she’s a witch and want to blame her for the failed crops and sickness. Linay, a stranger offers her a way of escape in exchange for her shadow and she agrees. She also receives a gift – her cat Taggle can now talk. But now without a shadow people really do think she is a witch. What can she do to survive?
Plain Kate (Arthur A. Levine Books, 2010) by Erin Bow is sad, believable, and spooky. The book came out this fall and is described by the author as “a Russian-flavored historical fantasy.” I enjoyed Kate a lot. I want my very own Taggle. But what cat lover wouldn’t want a talking cat?
The author was born in Iowa, raised in Nebraska and now resides in Ontario. Read more about her here. Her previous last name could feature in a fantasy itself…
Thanks to Mike Jung–who will also be publishing a book with Arthur–for turning me on to this book.