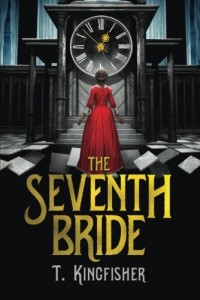 The Seventh Bride (47North, 2015) by T. Kingfisher is one of those scary books softened by humor so as not to be too scary.
Fifteen-year-old Rhea is the miller’s daughter and she’s angry. She’s engaged–not that she minds the idea in general–in the distant future. And being engaged to a Lord is a good thing, isn’t it? But something just seems a little, off. But she has to marry him, otherwise her whole family will suffer. Peasants don’t reject nobles.
This book is written for adults, but with a teen main character, it’s very relatable to teens, too.
T. Kingfisher’s bio makes me laugh. I’ve read books from her alter ego Ursula Vernon, as well.