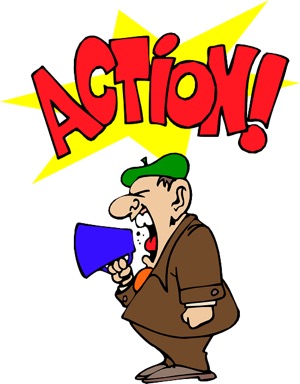 On a recent student manuscript, I found myself saying, “avoid stage directing.” I know the writer was trying to show, but it wasn’t working. What’s the difference from showing? In this particular case, the protagonist turned around to face the antagonist. We already knew they were standing close to each other. They were already in the midst of a conversation. It felt like a director saying, “Now turn and face him.” It wasn’t needed. It didn’t add—in fact, it distracted from the tension of the conversation.

Nat Russo says, “Too many stage directions and you’ll drain the lifeblood of your story (the drama and tension), too few and you leave the reader navigating without a compass and any idea of where True North is.”

Janice Hardy says, “Good stage direction requires balance and subtlety with the rest of the text. Too much and the scene drags, describing every little move a character makes.” (from “Finding the Right Balance With Your Stage Directions”– great article) She also says, “Skip the obvious.”

Then I found this fantastic article called, “Avoiding Stage Directions”  by M.L. Keller which says, “In novels, anything reported to the reader must be significant. For this reason, listing all of a character’s actions (including insignificant actions) actually creates distance.” The writer explains MRUs (Motivation-Reaction Units) in a very compelling way. This is a must-read article.

Back to the student’s protagonist and antagonist. Another action could have increased tension. And as M.L. Keller says, adding thoughts/motivation would even do more. Compare these three:

In these examples, the protagonist could be facing the antagonist, but we get so much more and know each situation is very different.

Nat Russo says, “Stage directions are small beats in your prose that seem, at first glance, like action beats. After all, it’s a character doing something. In reality, however, they often come across as ‘smack the reader over the head with the Hammer of Obvious’ beats.”