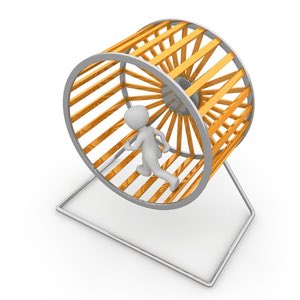 As writer’s it’s easy for us to get stuck in a groove or a track. Round and round we go. But unlike the view from a merry-go-round, we don’t want our readers seeing the same scenes or words over and over. If we repeat, it should be intentional.

So, what constitutes unnecessary repetition?

Reading the same word too close together or too often is boring. This doesn’t include really common words. “The more common the word, the more leeway you have in repeating it,” Brian Klems says. But for other words, it’s a danger. For example, there are many words to indicate eating. I might munch, crunch, gulp, slurp, etc. We bite, chew, swallow as part of the process. If every time my character eats, the word used is always the same, a reader may get annoyed. The more unusual the word, the more obvious overuse is. The shorter the piece, the more an overused word will stand out.

Be aware of how often you use a character’s name in dialogue.

Sounds unnatural, doesn’t it? And there’s no action.

“This is redundant” is a note I put on a student lesson when the information has already been given. I often find it with the same wording. It’s like the writer forgot she wrote it. This means she is probably not spending enough time revising.

“Trust the reader to get it” is often in response to the writer showing the reader, then telling the same thing. For example:

Jordan pulled his cell phone out of his jeans pocket and tapped the screen. “Come on, come on. What time is it?” The phone lit up. “Four o’clock! Leo’s gonna kill me.” He shoved his feet into untied shoes, and laces flapping, raced out the door.

Jordan was late to work.

The first paragraph shows Jordan’s late for something. We don’t know what, but when he shows up at work, we’ll get it. “Jordan was late to work” is telling. Not as interesting, besides being unnecessary.

How do you find overused words or repetitive information in your own writing?

Some can simply be eliminated. A writer I knew called them “weasel words”—they slip their way into your writing. Removing them doesn’t change the meaning of the sentence.

Consider taking an adverb and weak verb and replacing both with one stronger verb. Did she slowly climb the tree or did she inch up the tree? Same idea for adjectives and nouns. Is that big dog a Labrador or a Great Dane? See how these latter examples give you a better picture?

Think about other words you could use—we all know a lot! Ask yourself if you are using the best word. “It’s cloudy” could refer to an overcast day, a storm about to cut lose with rain, or a hurricane, but each would be very different to experience. A thesaurus is a useful tool if you get stuck, but choose words you know. Or consider how to say the sentence differently.

It can be difficult to find out where you’re stuck on repeat—that’s why using different methods is helpful. But once you become aware of your common patterns, you can use find or search in your word processor to track down the sneaky words.

2 thoughts on “Stuck on Repeat”