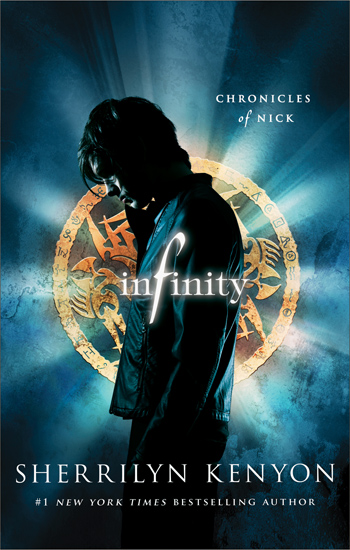 A student told me about author Sherrilyn Kenyon. I found the first book in the Chronicles of Nick (a spin-off series from the Dark-Hunter® novels if you’ve read her adult work), infinity (St. Martin’s Griffin, 2010). So far, there are nine books in this series. You can see them here. But back to infinity.
You can’t necessarily judge a book by it’s cover, but maybe in the case of this contemporary fantasy you can. Isn’t that a beautiful cover?
Nick Gautier (Go-shay) is fourteen and mortified by the orange Hawaiian shirt his single mom bought him at Goodwill. Are those pink and gray trout? Salmon? He can’t be seen in school in this . . . hideous thing. It’s bad enough he’s a scholarship kid in a “snotty overprivileged school.”
But life is about to get worse. First, it’s a fight to defend his mom’s honor. Then he’s suspended from school. When Nick helps three hustler friends as their watchdog, he gets shot and is taken to the hospital by this guy Kyrian.
But then life looks up. Sort of. Kyrian wants him to work for him to pay off the hospital debt. Then there’s a werewolf, and the undead, and flesh-eating zombies. Nick has to hide his dangerous new world from his mom.
Sherrilyn Kenon is an author with an amazing list of bestsellers. You can read all about her here.