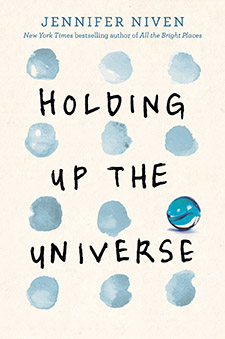 Holding Up the Universe (Alfred A. Knopf, 2016) by Jennifer Niven is an interesting read told from two colliding viewpoints.
On the one side is LIbby Strout, who three years ago had to have a wall knocked down to get her out of the house. She’d lost her mother and ate and ate until she weighed 653 pounds. Now that she’s lost 302 pounds, she can walk, run, dance, ride in a car, and Libby’s going to high school. Where, of course, she’s still the biggest girl there.
On the opposite side is Jack Masselin. He has a secret–face blindness that makes it very difficult for him to tell people apart, even his own family. He covers it up by being the life of the party–being friendly with everyone. Not his girlfriend or even his family know about his problem.
A dare at school makes the two teens meet and they are forced to spend time together. The weird part is–they should be enemies–both are surprised at how well they get along.
I think the bad language could have been toned down, but I do understand there are teens who talk like this.
On her website, Jennifer Niven says her stories are “about ordinary people doing extraordinary things.” That definitely fits this story. Read more about her here.