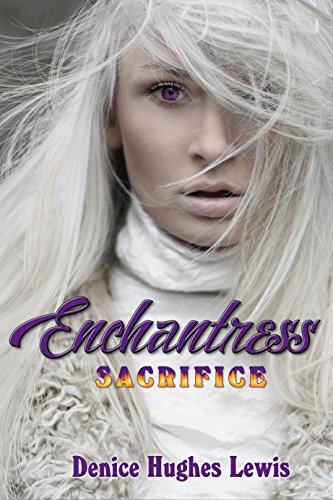 Enchantress Sacrifice (Amazon Digital Services LLC, 2016) by Denice Hughes Lewis is a YA fantasy with an interesting premise.
Destined to save her world, Elandra is born aware. She doesn’t breathe air, but light. (It sounds odd, but works.) Her mind and body grow fast under the protection of her two guardians. When she has 16 seasons, it’s time for Elandra to go out of the caverns and learn about the island. She must also learn how to control her sense of other’s feelings, and discover her powers to save everyone from Aru. But there’s other danger awaiting her–from her mother’s tribe, the Kepyrs, and from her father’s tribe, the Ice Lords. Sworn enemies, either tribe will kill her if they see her. Elandra wonders why she has to be the one to sacrifice herself to save everyone. Can’t she just be a normal girl?
Told in present tense, the book is fast paced and compelling. A sequel is in the works–I can’t wait for it to be done.
An interview with the author
1. Where were you when the idea for this book came to you?
At home. I always seem to have a dozen nebulous ideas for stories roaming around in my head. The idea of a baby being left in a forest and being raised by a monster was one of them. It wasn’t until Suzan Noyes, playwright, screenwriter and artist extraordinaire, talked me into going to a writing retreat with her that I decided I needed something to read aloud. I wrote the first few chapters and the ideas kept nudging me to continue.
2. What inspired you to write this story?
I love fantasy–the unique and different. I wanted to write a story for teens who feel isolated and those who struggle with emotions and how to control them. I set it in a more confined world with higher stakes to highlight Elantra’s choice between being selfish or sacrificing herself for the greater good.
3. How long did it take you to write this book?
That is a difficult question. Five years on and off. It was not a project at the top of my priority list. I also co-wrote two screenplays, directed three plays, worked on my picture books, attended writing conferences online and off, and added a middle-grade ebook to Amazon during that time. That doesn’t count life that always sidetracks writing goals.
4. What challenged or surprised you about writing this story?
It’s always interesting to see how a novel evolves and how our creative muses inspire us.
I just started putting words to paper for this book. It was the first piece of writing I
had ever done without an outline or plan other than how I wanted to start it and end it.
Later, I made a basic fifteen point outline described in Blake Snyder’s book, Save the Cat. Although he wrote for screenwriters, his methods work well for any kind of writing. I used these points for the direction of the plot elements and the changes necessary for the
evolution and emotional growth of the character.
The most surprising was the change in the Daniel character. In the beginning he was not from the modern world. By changing him, I had the much needed conflict and a more interesting, stronger love interest. It didn’t hurt that his desire to return home became the impetus for a sequel.
5. Why did you decide to self-publish?
I was a two-time graduate of the Institute of Writing Children’s Literature before the onslaught of the internet. Although I submitted for years, I got the usual rejections. This was a time when I was the mother of two children and life was more important than a career. When they left home, I decided to devote my time to writing and screenwriting. It just seemed logical to self-publish due to the financial benefits and the differences in the time frame for reaching the public. Marketing is the major consideration for all writers, but these days, a writer is often responsible for most of the publicity surrounding his work even if he is published traditionally. All writers who want their works read have to learn marketing, whether or not they want to. Self-motivation and initiative are two other requirements to self-publishing due to the decision-making process. It is also important to me to have control over the physical appearance of the book after spending so many years with my mental image.
6. Who are some of your favorite authors?
As a teenager I liked mystery and only read Nancy Drew books. I grew up loving movies and Disney. They made my imagination soar. I read the classics in school, but it wasn’t until I was married that I started reading fantasy. I find my greatest favorites belong to the English writers who write for young people. They have so much more history, geography and myth to draw from. C.S. Lewis, Susan Cooper and J.K. Rowling are some of my favorites. I write full-time and don’t read as much as I would like. Marissa Meyer has my awe for her Cinder series. To escape and laugh, I enjoy Janet Evanovich and her mystery-numbered series. There are so many good writers in all genres, that it’s a feast for all readers and I do regret not being able to read more. Right now I gauge my reading choices on what my 14-year-old granddaughter is reading since she’s in tune with the most popular fantasy writers who are very good.
About Denice

Denice Hughes Lewis is a wife, mother and grandmother who loves kids, animals, movies, theater, nature and especially adventures in unlimited imagination. She’s an award-winning ebook author and screenwriter. When she isn’t writing, she’s walking her Pomeranian dog, taking care of her 31-year-old blind pony and her 150-pound goat. Her other interests include writing plays and music, art and directing for the stage.