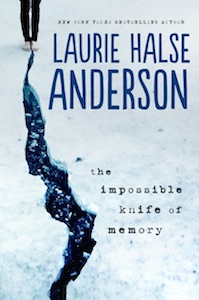 the impossible knife of memory (Viking, 2014) by Laurie Halse Anderson is a good book for those wanting to understand PTSD. It’s told from the viewpoint of a teen girl.
Hayley doesn’t know which father she’ll have when she comes home from school each day. The one who cares about her? The one having an attack of memory? Or the dead-to-the-world-sleeping-all-day one? Will he have gone to work? Will he want dinner? Or will he be drunk or drugged? But she’s expected to deal with starting a new school as a Senior anyway. That’d be difficult enough for most kids, but for the past five years Hayley’s been home schooled in her daddy’s big rig. How can she fit in with the zombies at school and keep her dad safe?
There’s an interview of Laurie about this book in USA Today (August 2013).

Her next book coming out on October 4th is Ashes, the final in the American Revolution trilogy which includes Chains and Forge. There’s a website for the trilogy here.