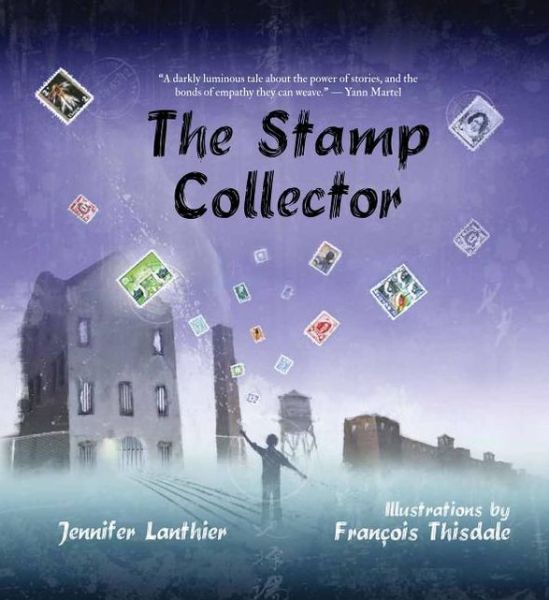 The Stamp Collector (Fitzhenry & Whiteside, 2012) by Jennifer Lanthier and illustrated by Francois Thisdale is a compelling picture book. It’s the story of two boys–one a stamp collector and one who loved words. One was from the city and poor. One was from the country.
The poor boy leaves school and takes a job as a prison guard. The country boy after seeing crops fail leaves school and goes to work in a factory. He writes. His stories bring hope to the villagers, but the grey men take him away. They say “words are dangerous” and send him to prison.
Both the guard and the prisoner are lonely, but there is no talking, no friendship, no laughter. The writer’s story is spreading. Letters start arriving for the writer, but he’s not allowed to see them. The guard saves a stamp, then another. One day he reads the letters. He can’t break the rules and give them to the prisoner. But he gives him a stamp. Then another. “Every stamp tells a story without words.”
When the prisoner gets sick, the guard brings him the letters that beg for another story. In whispers, he has the prisoner tell him a new story. He is holding the prisoner’s hand when he dies. The guard leaves his job, goes to a faraway library and begins to write.
This book has won a Crystal Kite Award and an Ezra Jack Keats Book Award.
Go to the author’s site to hear about her inspiration for this story.
Go to the illustrator’s site to see more of his beautiful artwork!