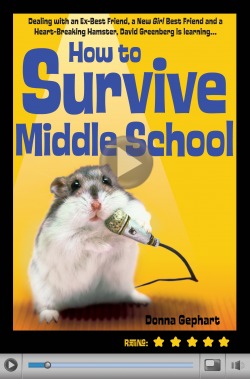 How to Survive Middle School (Delacorte, 2010) by Donna Gephart is both humorous and touching.
11-year-old David Greenberg wants to be a superstar talk host like his idol, Jon Stewart. David has top 6 ½ lists that he records on his videos which he posts on you-tube. The start of middle school doesn’t go well when he tells his best friend Elliot, who has been mooning over a girl all summer who put two hearts in his yearbook, that she put two hearts in everyone’s yearbook. Then he meets a new girl named Sophie, who helps his videos go viral by sharing with her homeschool network. Unfortunately, the “today’s acne forecast” on his sister gets him in trouble with her and his dad. Mom has gone awol and he can’t even call her. Then his hamster, the star of his show, dies.
Donna, a winner of the Sid Fleischman award for as if being 12-3/4 isn’t bad enough, my mother is running for president!, has another funny book coming out in spring 2012. See more details on her site.