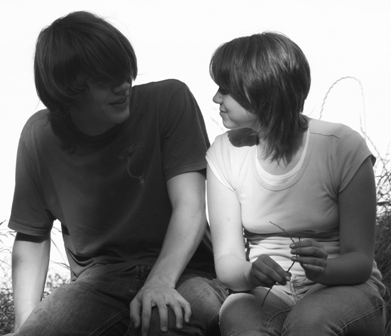 In a discussion of dialogue punctuation, someone recently asked me, “But where is the line drawn between an attribution and an action? For example: she laughed, she promised, she sighed, she groaned, etc. Are those treated as attributions or actions?”
Laughter, sighing, groaning are actions. We can’t laugh words. We sigh before or after we say a word(s). The more I think about it, groan is a tricky one. I can groan one word, “Mom!” or “Oh!,” but I couldn’t groan a whole sentence of words. I can simply groan. So another way to think about it, does the action stand alone or make sense without the words the character said? She laughed, groaned, sighed can stand alone. “She said” leaves us wanting to know what she said.
Promised is another tricky one. You make a promise and you state a promise. So when it is used with dialogue, I would consider it an attribution. Perhaps the simple rule would be if you can replace said with the verb without changing the meaning, it’s an attribution.
After reading my article on “Perfecting Dialogue Punctuation” on the Institute for Literature’s website, someone else asked, “What about when the dialogue is broken by an attribution? How do you punctuate it then?” It’s easiest to show with examples.
“Dad,” I said, “that was a lame joke.” Here the attribution interrupts the sentence at a natural pause. The punctuation is commas.
“Janie, that was so stupid,” he said. “I can’t believe you said that.” Here the attribution is at the end of one sentence before another begins. The punctuation is a comma at the end of the dialogue and a period at the end of the sentence.
Either way, you want your attribution at a natural place. You’ll probably hear where a good break is when you read it aloud.
What about interruptions to dialogue? That is usually indicated with an “em dash”–type in double dashes and your computer usually will convert.
“Stop kicking my seat, Jo–”
“I’m not!” Jonah said. “It’s Liam.”
This works with either dialogue that interrupts or with action.
“Mom, how come Willy gets to–OW!” Leslie grabbed her arm. “Hey, no punching!” She glared at her brother.
or
“Hey, let’s go to the movie and th–”
Katie put her hand over my mouth. “Shh, Mrs. Wilson’s coming.”
Pauses in the speaker’s dialogue are another issue. If he interrupts his own words or deliberately leaves something out, use an ellipses.
“I wanted to ask her, but . . .” He shrugged.
Or
“Did you get problem six . . . omg, there he is!” Tanya clutched her shirt somewhere near her heart.
If in doubt about punctuating attributions or actions, you can always looks at dialogue in published books or short stories. A resource I like is the book Errors in English and Ways to Correct Them by Harry Shaw. My 25-year-old copy is so well-used it’s falling apart!
If you have more questions or comments, use the comment box.

One thought on “Attribution or Action?”