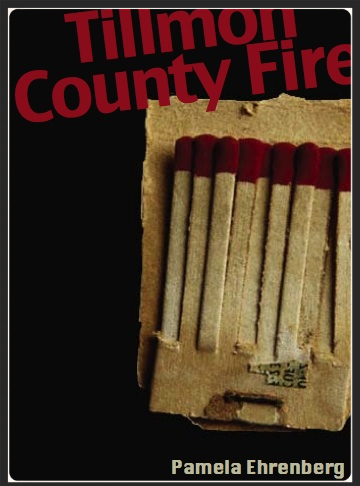 Since I enjoyed Ethan, Suspended so much, I thought I’d chat with author Pamela Ehrenberg about her newest book, Tillman County Fire (Eerdmans, 2009), which unfortunately I haven’t gotten to read yet, but will!

QUESTION: What lead you to write the book as a series of stories?

PAM: I was inspired by the Ernest Gaines novel, A Gathering of Old Men, which tells about a community event (in that case, a murder on a plantation) from the viewpoints of various people involved. That book really made me think about what it means to be part of a community, and how everyone’s got just a piece of whatever the story is.

QUESTION: How/why did you choose to write about the topic of an anti-gay hate crime?

PAM: You know, for this book I actually knew what the format would be–the different stories from different perspectives–before I knew what the book would be about. So I knew something was going to happen in this community that had the potential to bring people together or pull people apart as much as that murder did in the Ernest Gaines book . . . I don’t know that I ever decide what happens in my books–it feels more like I discover what happens, by being open to the world of the story.

QUESTION: I understand each story is about the same event, yet each focuses on a different character. Are the stories written from each character’s viewpoint or is there a narrator? If the former, did you struggle with writing in so many viewpoints?

PAM: Each story is first-person from a different perspective, except that the last story is told in the third person and there’s one story where multiple voices come together, with different characters narrating a section. I think I avoided a lot of the struggles that might come with the multiple voices by really viewing the project for a long time as a collection of short stories–it took my writing group a fair amount of effort to convince me that I was really writing a novel. Even though I agree with them now, each story is still pretty well self-contained–as I think real teenagers (and real grown-ups) are–each narrator sees his or her own concerns as the central ones.

QUESTION: What was the most difficult thing for you in writing this particular book?

PAM: It’s not technically part of the writing of the book, but I’d have to say the hardest thing is not having my husband, Eric, here to celebrate with me. He died last summer at age 37–and though he got to read two drafts, provide valuable legal consultation, and even see the cover art, it was hard not having him here when the box of books showed up on the doorstep. He was always the one to remind me to stop and celebrate these moments in life, and not be so focused on forging ahead to the next thing that you don’t take time to celebrate what’s in front of you.

QUESTION: What’s been the best about working on this book?

PAM: The best thing was the chance to “live,” for a while, in Tillmon County. The county was inspired by the place in far western Maryland where I was an AmeriCorps member in the mid-1990s, and working on the book is the closest I’ve come to a second chance to live in the mountains.

QUESTION: Reading your writing tips on your website, I noticed in the revising section, you said, “Make it Shorter.” You said you have a list of weak words that you search for in your manuscript. Do you mind sharing that list?

PAM: Gosh, I’d forgotten all about that! It turned out I didn’t use it as much this time around–maybe the exercise of searching for all of these things in Ethan, Suspended meant that fewer of them turned up in the early drafts of this book? I don’t know. But I’m happy to share!

WORDS TO SEARCH FOR

WORDY:
a little
a lot
about
all
all of a sudden
all over
almost
already
and everything
as soon as
at least
at the same time
be
decided
depends on
done
even
felt
finally
gotten/getting
had
had no idea
it
it was like/it’s like/it wasn’t like/it isn’t like/it’s not like
just
kind of
knew
look(ed) over
-ly words
maybe
myself (telling_, thinking to__)
notice
off
on the other hand
on top of
or anything
or something
out
pretty
probably
realize
really
right
said
seem
some kind of
sometimes
start
stuff
suddenly
suppose
that
that had
that was
that were
there
this
thought
try
was sure
well
whole
wondered
you know