“When you sell a man a book you don’t sell him just twelve ounces of paper and ink and glue–you sell him a whole new life.” –Christopher Darlington Morley (1890-1957) 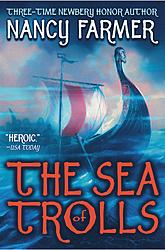 When I read The Sea of Trolls by Nancy Farmer (Atheneum Books for Children, 2004), I got so involved in the reality of Jack’s life, I found it hard to put the book down.   Besides wondering why I had never discovered this author before, I immediately passed the fantasy book on to my husband for his enjoyment.

Jack, an apprentice to the Bard, is taken by Northmen beserkers and becomes a slave.   The magic he knows and his singing skills help keep him alive.   But worse yet his little sister Lucy is given to the half-troll Queen Frith, who plans to execute her unless Jack’s successful on a quest to the land of the trolls.   Even though Jack wants to hate the Northmen for what they’ve done and the way they live, he does see good in them.

Nancy Farmer is a three-time Newbery Honor winner.  Here’s a site that tells more about her:  http://www.fantasticfiction.co.uk/f/nancy-farmer/  You can also read about her at her publisher’s site:
http://www.simonsays.com/content/destination.cfm?tab=7&pid=363834

One thought on “The Sea of Trolls”